The United Nation General Assembly in its Resolution A/RES/74/299) declared the new Decade of Action for Road Safety 2021-2030.As part of the declarations, the UN is holding the 6th Global Road Safety Week on 17-23 May.

The 2020 Stockholm Declaration, adopted by governments worldwide, is central to the campaign – calling for, in line with available evidence, a maximum road travel speed of 30 km/h where vulnerable road users and vehicles mix in a frequent and planned manner.

The focus of this campaign is to promote low speeds, particularly to protect the vulnerable, to prevent road traffic injury and to help encourage walking and cycling. In this way, low speed, liveable streets can also support physical activity and can reduce climate impacts where vehicles mix in a frequent and planned manner. 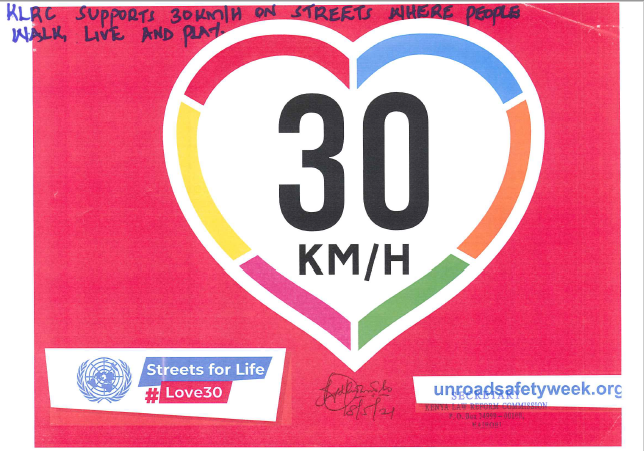 The Commission is committed in mainstreaming road safety policies in its operations including in its Performance Contracting targets each financial year and in living up to its mandate of offering technical assistance to MDAs, the Commission continues to work closely with NTSA to strengthen Road safety in the country.  KLRC takes this opportunity to congratulate NTSA for spearheading Road Safety in the country.

“We support 30km/h limits where people and traffic mix because safety and health of all us is important in economic growth.” #love30 @UNGRSW #StreetsforLife