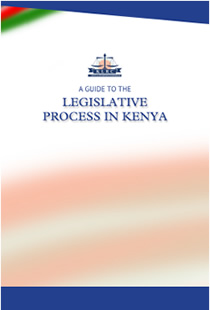 Download A Guide to the Legislative Process in Kenya in PDF (1.8MB)

Good quality legislation is one of the most fundamental tenets of any modern and civilized democratic society. The process of developing such legislation is as critical as the product. It is important for legislative bodies, policy makers, draftspersons and members of the public to not only sufficiently understand, but also have the opportunity to participate meaningfully in the legislative process and to have the capacity to analyze and ensure strict adherence to established standards and procedures.

Our 2010 Constitution heralded various changes in the legislative process in Kenya. Among these are: a Bicameral Parliament consisting of the National Assembly and the Senate; creation of 47 County Assemblies in each of the 47 counties; and the requirement for public participation in policy making and
legislation.

In essence the legislative process is now devolved. The rules and procedures of making legislation in Kenya have been sufficiently expanded and fundamentally altered. Under the devolved system of government, we now have the Senate and National Assembly at the national level and the County Assemblies at the county level as the primary legislative organs.

This Guide seeks to explain the process of law making in Kenya. It should be read alongside other relevant official guidelines and publications such as the Office of the President Circular on the Role of Government Institutions and the Commission for the Implementation of the Constitution (CIC) in the process of implementing the Constitution of Kenya dated 11th April, 2011; the Office of the Attorney General and Department of Justice Circular on Proposed Legislation dated 20th May, 2013, and; the Attorney General Circular on Government Legal Advisory Services dated 3rd May, 2010.

The Guide to the Legislative Process in Kenya is among the Kenya Law Reform Commission’s (KLRC’s) key contributions to the process of proper legislation at both levels of government. It aims at achieving the extensive goal of guiding the legislative process and facilitating law reform that is conducive to social, economic and political development of Kenya.

The Guide emphasizes, with sufficient reasons, the factors that buttress every stage of the legislative process. Such observance will ensure that the process of making legislation is flawless and that such law can stand the test of constitutionality. Another key highlight is the fact that policy precedes law. The Guide discusses the process of law-making as it emanates from an idea to serve a particular goal in society, development of an appropriate policy and the decision to transmute the policy into legislation. This gradual process and attendant factors around policy decisions are elaborated.

The Guide is divided into 12 parts. Part 1 is the introductory part which introduces legislation and the legislative process in Kenya. It also gives the rationale for the Guide and its scope. Kenya Law Reform Commission and its roles, mandates, relationships and functions are discussed in Part 2, to give the reader an insight into the Commission’s work as the agency that facilitates law reform. Part 3 delves into policy development, giving the reader an understanding of the factors to consider when developing policy. This part also heavily features the aspect of public participation as one of the pertinent elements of the legislative process.

Part 4 gives an overview of the policy formulation process, while Part 5 discusses how policy is translated into legislation. Part 6 delineates the key aspects of legislative drafting, giving the reader, be it a legislator, a drafter, or a member of the public the essential aspects to consider in developing or determining well written law. Part 7 discusses the pre-publication scrutiny of all. Parts 8, 9, 10 and 11 discuss post-legislative matters, including assent and referral, publication and amendment. Finally Part 12 discusses regulatory impact assessment, while Part 13 concludes by discussing contextualization and customization of model laws, another key plank of the Commission’s support to county governments.

This Guide offers an opportunity to its reader to comprehensively appreciate all aspects that attend to legislation in Kenya. In doing so, it offers not only a road map to involvement in law making, but more importantly, to ensuring that law is used as a functional tool that will heavily contribute to Kenya’s social, economic and political development.